(Some Random Thoughts)
We have finally passed another year successfully !!! Doesn’t it sound great ?  It feels really worthwhile to look back and find yourself somewhat better than you used to be. Obviously, each year brings new experiences and new lessons to learn from.

For a person , like me, who resides in another country, but wishes to keep links with her roots, the things never leave me unastounded . My each visit to Pakistan, gives me an idea what I had been missing. Being a woman,  for me, the changes in local fashion, tastes and life styles are always worrisome. Once I landed here in dark red suit, only to get  critical looks while everyone was  wearing pastels !!! So before coming, I always make a point to be ready with extra cash and time for exclusive shopping which would make at least look like a normal local resident. Apart from these, there are other things which cannot go unnoticed. For example, the changing general attitudes of people.  I do miss the same old warmth, friendliness and hospitality.  Are they slowly becoming the words of yesterday?

Is this the same world ?
As if it was some relief to such negative thinking , I just came across this news that  the world population has reached 7 billion and the next 1 billion will be added in another decade. I checked when I was born, this figure was  around 3 billion and  … here I am living in a world with more than double that number of people !!! Does this have to do anything with what we are having as today’s life ?

Living in a megacity : Dream on… 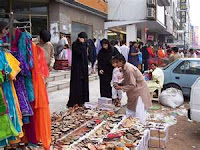 Of course, the price of such a population explosion has to be paid.  I saw, the playgrounds, where being a kid, I used to run around, play,  have fun with friends,  are no more existing. I remember, there were such big empty grounds that my mom always warned me not to go far away to avoid getting lost.  Now you see the same areas filled with thousands of houses. People living in congested neighbourhoods, mostly talk about dearness and their sickness/ hospital visits (another added feature I have been seeing lately, probably due to increasing pollution, lack of clean drinking water and impurities in food stuff ).   You can see over stretched markets and  shopping malls but you cannot find a parking for your car. There are no walking paths, or by chance if you see them, are mostly  occupied by street vendors. People keep flocking to these vendors for  some bargains but leaving hardly any way for passersby. The cities are bulging with population overwhelmingly and more people keep migrating and settling here. No wonder, Karachi has become the third most populous city in the world.
http://en.wikipedia.org/wiki/List_of_cities_proper_by_population

Kudos to those living and coping in such conditions,  not to mention the daily problems of strife and terrorism. The city still thrives as modern shopping malls and hypermarkets  are being opened every other day. The best thing about Karachi is that people still have high hopes.

Back to the place I have been living for last 16 years (UAE), they have already  unveiled  a year 2030 vision, where I found quite futuristic town planning, emphasizing on the sustainability of environment.  There are plans for changing main streets of the city turned into traffic free places and initiating an alternative carbon free transportation system. There will be an extensive network of tunnels and new roads to manage estimated increased traffic. And as per the set targets,  they have started working on it by shifting city residents to suburban areas and making the city center exclusive for businesses. I see the people of the UAE having a bright future with a nice clean environment for their kids. Each year will bring more and more opportunities for them.

On this new year’s eve, is it too much to ask, when and who will plan for me and my children’s future in Pakistan?  If we really love our motherland, we have to start thinking now. It has nourished us and gave us a ground to  stand. Now its our turn to give back whatever we can.